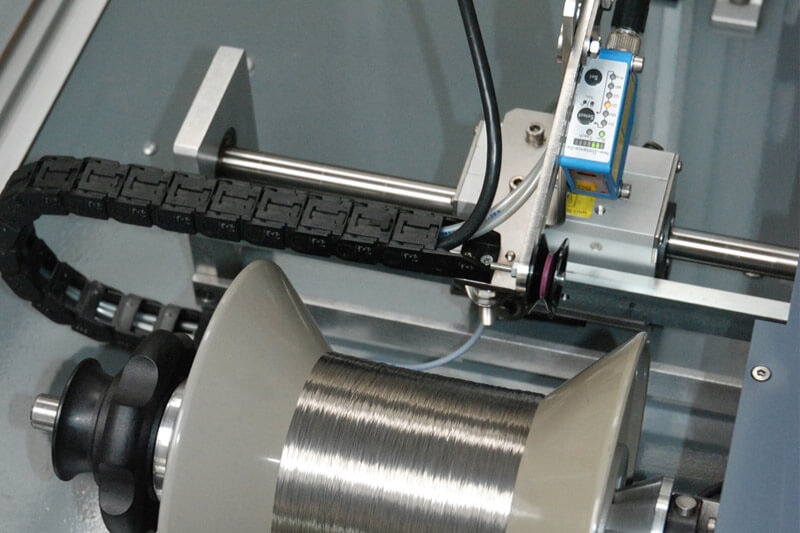 Amacoil/Uhing has announced that their FA Flange Detection System has been reengineered for simpler operation and now utilizes laser sensor technology for expanded functionality. The new FA-II system is PLC-controlled and requires none of the tedious adjustments associated with the previous version. Additionally, whereas the original system worked only on spools having straight flanges, the new FA-II may be used with spools having either straight or tapered flanges.

The FA-II system saves time by eliminating the need for an operator to adjust the reversal stops on the Uhing traverse. During spool changeovers, it is often the case that a new spool is not placed on the mandrel in the exact same position as the spool being replaced. Normally this means that a worker must readjust the end stops on the traverse to make sure the traverse reverses at the correct points. The FA-II eliminates this step saving time and enabling operators to manage more winding stations which helps boost production. Furthermore, winding accuracy is improved because the laser sensor is a more accurate means of locating the spool flange edge than the human eye.

In its original version, the FA featured a two-pronged fork-shaped fixture mounted on the Uhing traverse. A steady beam of light between the prongs formed a light curtain which, when interrupted by the flange edge, triggered pneumatically controlled reversal of the traverse. Instead of a light beam, the FA-II system employs a laser sensor mounted to the traverse. The sensor continually references the distance from the spool core up to the highest point that wire or other material will be spooled. When the sensor detects the spool flange, the reading is not within the acceptable variance and a signal is sent to a pneumatic cylinder which reverses the traverse.

To optimize the effectiveness of the FA-II Flange Detection System it is necessary that spool flanges are not bent or damaged. The laser sensor should be protected from particulate contaminants (dust, metal particles, wood chips, etc.). The FA-II system accommodates materials with round cross-sections and a diameter of 0.1 to 2.0 mm (.004 – .079 in.). Spool flange diameter may be up to 220 mm (8-43/64 in.) maximum. The system will handle spools with tapered flanges having an angle of up to 40 degrees. Operating temperature range is -10 to 40 degrees C (14 – 104 degrees F). Maximum operating air pressure is 6 bar (87 psi).

Flange sensing systems are available on new Uhing winding drive assemblies and, in some cases, may be retrofitted to existing Uhing set-ups. Additionally, the FA-II is often adaptable to other types of traversing systems depending on application parameters. Information and a technical manual are available from Amacoil who supplies Uhing linear drive units separately or in custom fabricated assemblies with shaft and end supports. As the exclusive North American distributor for Uhing, Amacoil provides sales, technical support, service/repairs and parts.